Home » The training of the biceps (II): Implied muscles 1

The training of the biceps (II): Implied muscles 1 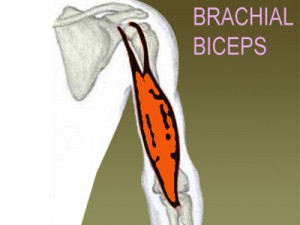 Here they can end up collaborating from the brachial biceps that is born in the scapula and the humerus, until the wrist flexors and of the fingers.

We cannot forget it when outlining the training, thing that we will try later on, but now we will analyze the musculature that intervenes directly in the flexion of the elbow, that of the arm.

The brachial biceps is the most important muscle in the flexion of the elbow. When it contracts, it  curves and it convexs visibly under the skin, giving that form of so characteristic ball.

It is a muscle that crosses two articulations (shoulder and elbow). It is denominated biceps because in the superior part it has two origins.

– The long biceps that is prolonged for a tendon that circulates for a channel located in the head of the humerus, and that it acts like a pulley. This muscular faction collaborates in the separation of the arm.

– The short biceps that unites a little more to the scapula toward the interior, strengthening the connection and collaborating in the approach of the arm toward the trunk.

The brachial biceps collaborates in the pushing of the shoulder (to advance it).

The two biceps unite when descending for the arm to form an unique tendon that unites to the forearm in the high part of the radio (that is to say, very near the elbow).

We will continue speaking of the rest of the muscles that  intervene in the flexion.