There is no widget. You should add your widgets into Single left sidebar area on Appearance => Widgets of your dashboard.
Physical exercisesJuly 14, 2008

The press ups (I): What are they and how are they made?

0Shares
21330
In the time of simple reaction the reaction speed is manifested to a stimulus in its purer state, because it represents the time that takes a long time in sending the answer message to a concrete stimulus. 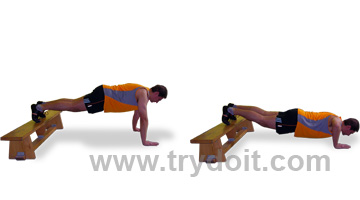 The press-up  is probably a good known exercise of force that exists next to the abdominal ones. They have sent us more than once to carry out them when we went to school to become strong, to evaluate us in some cases, and in the military instruction it has always been considered a basic exercise.

It is an enough hard exercise and it requires a certain level in a physical way to be able to make them well, although variations can be made in the basic exercise that you allow to be carried out a progressive work. Their biggest advantage is that they do not require the material use.

The press -ups are used to improve the force of the superior train displacing the weight of the body. They will strengthen the musculature of the chest and the arms, what prepares us for the movements in those that it is necessary to rush or to push something.

Being more concrete, they would strengthen the pectoral, the previous (muscle of the shoulder) deltoids, and the triceps. According to the variants that we make, they will imply other muscular areas, but of that we will speak later on.

It is very important to carry out them well, maintaining the very right trunk and aligned with the legs. For it, it is necessary to make an abdominal intense work to avoid that the stomach falls down.

This is one of the reasons for those that the exercise is so tired, since to part of being hard, it hinders the breathing for the excess of muscular tension in the thorax.

The musculature of the dorsal high (scapular area) area, opens up as a fan stabilizing the position of the shoulders. This work, if one makes correctly, benefits the acquisition of a corporal good posture.

In consequence, the flexions will not only strengthen the musculature of the chest and arms, but rather it goes us to help to work the abdominal ones and to improve our resistance.

2. How are they executed?

In support of hands and feet.  The separate feet the width of the shoulders and the hands something more separated with the fingers looking to the front. The right trunk and aligned with the legs forming an iron.

The shoulders push actively towards the floor to open the back and the abdominal ones hold the trunk so that it does not fall to the floor. The column lengthens from the crown toward the front for not descending the head:

– To inspire, flexing our elbows, descending the trunk and legs like one only, without losing the posture that we had.

– To exhale, extending the elbows to return to the origin.

In the next delivery, we will speak of how we can progress in this exercise, from the simplest forms until the most difficult, allowing us an evolution in their training.