Home » The marathon (I): The legend of Filipides

The marathon (I): The legend of Filipides 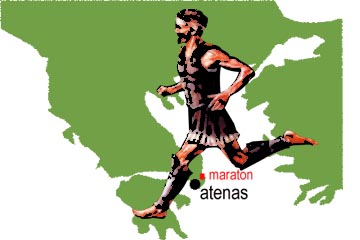 The origin of this specialty, as well as its name, surrenders homage to the legend that wraps to the battle of Marathon, taken place in the year 490 A.C.

The Greek tried to defend of the invasion of the Persian empire. The conflict between both towns had military several conflicts throughout the years, and these confrontations passed to the history with the name of Medics Wars.

Both armies measured forces in the marathon plains that are located some 48 kms of Athens. The Greek left to the encounter of the Persian ones leaving women and children given refuge in the Acropolis.

The Greek knew that if the Persian  conquered, they would go on the polis, with the idea of plundering the city, to humiliate and to murder the population.

For that reason, they reached the agreement that if they didn’t receive news of the victory in less than 24 hours, to the evening, they would be the Greek own women, those that would take charge that the Persian ones didn’t find anybody alive when arriving to the city.

The Greek of Milciades conquered in the combat, lengthening the battle more than that waited, for what they would have problems to warn on time and to avoid the butcher shop.

According to the legend, and this part of the history is the one that generates certain doubts among the historians, the soldier Filipides offered himself to go running to Athens to transfer the news of the victory.

It was running to Athens running, after a ferocious fight of 24 hours, he gave the news, and he fell dead of exhaustion. This feat impeded the population’s immolation.

When the first Olympic Games were planned in Athens, they wanted to surrender a homage to this history and they incorporated this discipline to the olympic program.

We will continue with the history of this test.