Hack Squats (I): Characteristic and utilities 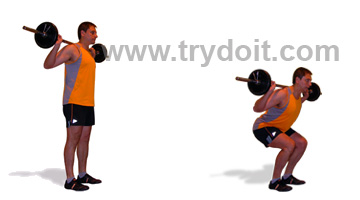 It is a natural movement in the human being that is considered as the fundamental exercise of the training.


It is classified as a global movement because it involves muscular big and numerous masses of the body.

Another characteristic of this movement is that the body moves regarding a point of fixed support. These movements are denominated of closed chain.

The jumps with they are not more than a speedy and potent execution of the hack squat, concluding with the leaving of the floor. For that reason, the hack squat is essential in all plan of training that develops the power and the speed.

In the training of the weight-lifting, the hack squat is part of the repertoire of competition movements, it becomes essential to lift an object from the floor with the erect back, what is important for not suffering back problems.

And it is that the movement can become hard overloading the body with weight, of there its utility to develop the force extensor of the inferior train.

In this sense, it is an exercise that facilitates to move big loads, what requires to dominate the execution very well so that it doesn’t provoke lesions in the column or in the inferior members.

When implying a muscular great mass, it has a cardiovascular great effect. If one works a high number of repetitions, a great oxygen consumption is reached, like it happens with other movements like the oar or the bottom ski.

The movement allows a good expansion of the thoracic box, and with it a breathing good capacity.