There is no widget. You should add your widgets into Single left sidebar area on Appearance => Widgets of your dashboard.
Physical activitiesJuly 18, 2008

Climbing by a rope (I): To ascend with the grabs of the legs 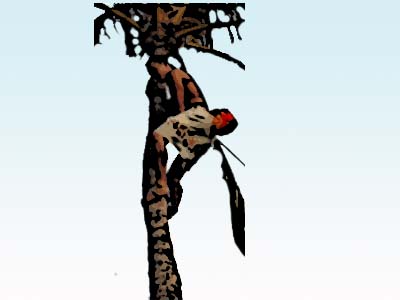 The climbing or ascension by a rope is a classic exercise in the physical military preparation, as well as in the preparation of the firemen.

This activity requires a good coordination level among the superior and inferior train, and a high level of force in the musculature  (abdominal, dorsals, biceps, hip flexors, flexors of the hand and of the fingers, etc).

It is a very hard exercise and it shows the practitioner’s autonomy to dominate their weight in suspension.

In this sense the climb by a rope  can help us in the physical preparation for the escalade at level of the development of the force  of the arms, as well as in the resistance and hardening of the one grabs, although to be able to climb it is not necessary to dominate the ascent for the rope (at least in the initial levels).

The climb by a rope can be carried out securing us with the legs in the rope, or climbing exclusively with the traction of the arms.

When we help ourselves holding us with the legs, we are climbing in a similar way  as we would make it in a tree.

Here the technique of ascension is limited to go alternating the displacement of hands or legs toward a higher point of the rope while we cling alternatingly to the rope with the feet or the hands to sustain us and to reduce the load.

The cross legs and the rope coils among them to increase the contact area, the friction for not slipping down.

In some cases the rope has some knots separating short tracts to facilitate the support of the legs. This is very well for the initiation.